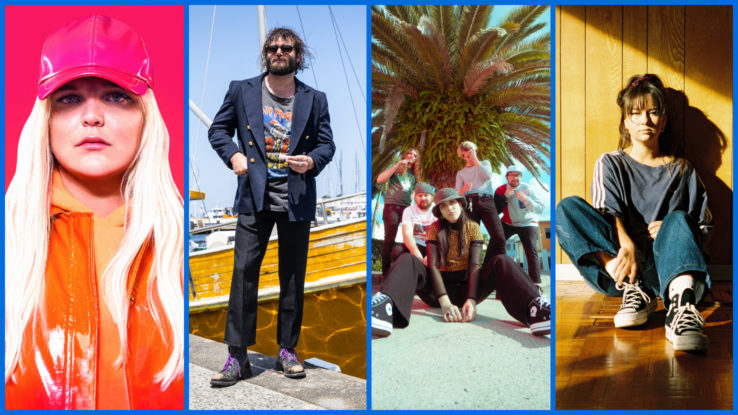 Want an extra slice of this year’s Groovin The Moo pie?

*Update: Some of the artists locked in to tour around the now-cancelled Groovin The Moo festival have announced new, rescheduled tour dates taking place later in 2020. All current tickets are valid for new dates unless stated in official communication from Ticketmaster or Moshtix.

Is there a bigger Australian artist right now than Tones and I? We don’t think so. Fresh off the back of some standout sets at Laneway Festival, the global breakout artist will be bringing her swag of killer, catchy tunes to venues right around the country.

It’s hard not to love a single as catchy as ‘Dance Monkey’, and it seems the whole world agrees. Not only did Tones and I make history when she became the first artist to spend 24 weeks at #1 on the ARIA Singles Chart, but since its release back in May, the tune has reached #1 in 30 countries – including a record-breaking 11 weeks at #1 in the UK.

Oh yeah, that’s not it though. The single also held the spot as the most-streamed song globally for four whole months, became the most Shazamed song of all time, and is now the longest ever running #1 song on the Spotify Global Chart. Not too bag for an artist who only released her first single less than twelve months ago.

Tones and I is one of the most in-demand artists in Australia right now, so this tour might just be your only chance to experience her catalogue this intimately.

Tones and I Australia 2020 Tour Dates

It’s hard to deny the fact that Waax are one of the finest punk acts Australia currently has to offer. And fronted by the inimitable force that is Maz DeVita, the past few years have seen the band establish themselves as one of the most razor-sharp, hardest-hitting acts you’ll find. Whether it’s festival stages, small bandrooms, or national arenas, there aren’t many venues in this country that haven’t been greeted by a little blood and sweat at the hands of Waax, and now with their debut album Big Grief in hand they are ready to add some more to the list.

Adding to the good times across the tour are Brisbane’s happiest punks and some of our absolute faves Bugs. Their infectiously catchy jams, like those showcased on their second album Self Help, will have you smiling for days.

Get your tickets right here.

After a huge year in 2019, Melbourne rockers Slowly Slowly are kicking off 2020 with the announcement of their third album Race Car Blues. The follow up to their much-loved 2018 release St. Leonards, Race Car Blues captures a formative period for Slowly Slowly frontman Ben Stewart. Where St. Leonards found him reflecting on his entire life – harking back to painful moments and trying to rectify them – this album traverses through a crucial 18 months of self-assessment and development. These performances will be a celebration of that album entering the world.

The days of Dope Lemon being a little passion project for folk crooner Angus Stone are long gone thanks to his incredible second full-length, last year’s Smooth Big Cat. Now he’ll be stepping off the Groovin’ The Moo stage to deliver its spectacular gems, and those from his Dope Lemon debut Honey Bones in a couple of intimate headline shows.

As one half of Angus and Julia Stone, Angus has gone on to cement himself as one of the most successful Australian artists of the last 30 years, but it is as Dope Lemon where he fully gets to flex his musical prowess – playing every single instrument on his latest album as well as helping out with mixing and production.

As an added bonus, ticket holders to these shows can also look forward to a travelling pop-up art exhibition at each show, generated by some very Dope Lemons and curated by the band. Get ready to be swept up in Dope Lemon’s chilled-out, bliss-filled hazy jams.

We couldn’t be more excited to have Britpop legends Supergrass on our shores to celebrate their 25th anniversary this April and May. The run, celebrating their debut studio album I Should Coco, will be their first headline shows in Australia in twelve years.

But as they say, good things come to those who wait, and the exciting news follows the announcement back in September that Supergrass were reforming after a ten-year split to tour the United Kingdom, Europe and North America.

If reviews of their surprise reunion shows at Glastonbury’s Pilton Party and London’s Oslo are anything to go by – described as ‘glorious’, ‘triumphant’, ‘terrific’, ‘vital’, and any other myriad of exciting adjectives – we cannot wait for these shows to roll around.

Get your tickets right here.

16-year-old rap prodigy Bhad Bhabie is making her way back to Aussie shores, and she’s locked in a run of headline shows just for her biggest fans. These will be her first headline shows Down Under in two years. After coming to international attention when she was just 13 years old, Bhabie has transformed into a platinum-selling hip-hop sensation.

UPDATE: Mallrat has rescheduled her May tour dates until January 2021.

Her latest single ‘Charlie’ – written about her beloved family dog – is still getting us in the feels, and now Mallrat will take the single, alongside the rest of the glittery tracks from her recent EP Driving Music, on the road this May and June.

The five-track release followed on from her 2018 EP, In The Sky, which gave us much-loved singles ‘Groceries’ and ‘Better’, and garnered Mallrat a devoted and enthusiastic fanbase all around the world.

2019 saw her supporting King Princess, Allday and Maggie Rogers, playing festivals like Stonefest and Wildlands, and taking on what were her biggest headline shows to date. This time around she is stepping things up further, bringing her magic to some of Australia’s favourite stages.

One of the UK’s hottest rap acts, AJ Tracey, will play his biggest Australian dates so far on his first visit Down Under since the triumphant release of his debut, self-titled album in 2019. Emerging via the UK grime scene back in 2015, the London-born artist has continuously pushed the boundaries of UK rap

US multi-instrumentalist, songwriter and producer Clairo will bring her dream-pop back to Australian stages this April and May. 2019’s stellar debut album Immunity cemented Clairo as a global force of indie pop, the record marrying her DIY roots with sophisticated production that took in trip-hop, indie-rock and hymns. As well as touring with Tyler, The Creator; Khalid and Dua Lipa, Clairo has appeared at Coachella, Lollapalooza and Pitchfork Music Fest.

With a swagger of pusher anthems, free-flowing storytelling and a dynamic array trap heavy hits, wisecrack, gangsta/trap-rap emcee Maxo Kream is ready to embark his first-ever run of Australian headline shows this April/May. He’ll be bringing young emcee Shadow along with him.

When indie rockers San Cisco take the stage later this year, they’ll do so with their new EP Flaws in hand. The Flaws EP will be released this March and will include previously released singles ‘Skin’ and ‘Reasons’ – standing as a musical taster for what’s to come from the band’s fourth studio album due later in the year.

*Update: YBN Cordae has cancelled his April and May Australian tour dates.*

Raised in Maryland, the now Los Angeles-based MC YBN Cordae has earned his reputation as one of rap music’s most nimble and acrobatic storytellers. On his full-length debut, The Lost Boy, he employs the full power of language and showcases his full artistic power. Dubbed as an Artist To Watch by everyone from Amazon Music, to New York Times, Billboard, iHeart Radio, and VEVO DSCVR, his upcoming trip Down Under is one not to miss.

There is more Groovin’ The Moo sideshow goodness coming your way real soon. Keep your eyes locked here for all the updates!